By
Ilaria Chillotti
Published on:
May 4, 2022
in
Engineering

‍This blog post is part of a series of posts dedicated to the Fully Homomorphic Encryption scheme called TFHE (also known as CGGI, from the names of the authors Chillotti-Gama-Georgieva-Izabachène). Each post will allow you to go deeper into the understanding of the scheme. The subject is challenging, we know, but don’t worry, we will dive into it little by little.

Disclaimer: If you have watched the video TFHE Deep Dive, you might find some minor differences in this series of blog posts. That’s because here there is more content and a larger focus on examples. All the dots will connect in the end.

TFHE is a Fully Homomorphic Encryption (FHE) scheme. That means it is an encryption scheme that allows you to perform computations over encrypted data. To know more about FHE schemes in general, take a look at this blog post.

TFHE was initially proposed as an improvement of the scheme FHEW, and then it started developing in a broader direction. The security of the scheme is based on a hard lattice problem called Learning With Errors, or LWE in short, and its variants, such as Ring LWE (RLWE). In fact, the majority of FHE schemes used nowadays are LWE based and use noisy ciphertexts. TFHE is, however, distinguished from the others because it proposes a special bootstrapping which is very fast and able to evaluate a function at the same time as it reduces the noise.

A few blog posts will be necessary before we talk in detail about bootstrapping, so no rush for now in trying to understand how it works. Let’s start from “the beginning” by describing the ciphertexts used in TFHE.

A few mathematical objects will be needed to understand this blog post series.

What is the first thing you talk about when you give a recipe? The ingredients, of course! In our case, the main ingredients are the ciphertexts.

In TFHE, we mainly use three types of ciphertexts: LWE, RLWE, and RGSW ciphertexts. Why we need three different types of ciphertexts, you might wonder. Long story short, the reason is that all of them have different properties which will be useful in the homomorphic operations that we will describe in the following blog posts. All of them have security that relies on the LWE problem or its variants. To know more about LWE security, please take a look at this blog post.

In this blog post we will give you more general definitions in order to help you understand the objects we manipulate.
These ciphertext are not only used in TFHE, but also in other LWE-based FHE schemes.

If you’ve already heard about LWE based FHE schemes, you have also probably heard about LWE and RLWE ciphertexts.
In this section we will use a generalization that includes both of them, called General LWE, or GLWE in short.

Now let’s see how to encrypt messages. Let $p$ and $q$ be two positive integers, such that $p\leq q$ and let’s define $\Delta = q/p$. In TFHE, $q$ and $p$ are often chosen to be powers of two: if they are not, a rounding at the moment of encoding of messages should be applied. We will call $q$ ciphertext modulus, $p$ plaintext modulus, and $\Delta$ scaling factor. Let’s consider a message $M \in \mathcal{R}_p$. A GLWE ciphertext encrypting the message $M$ under the secret key $\vec{S}$ is a tuple:

Observe that the message $M$ is in the MSB part of $\Delta M + E$ (thanks to the multiplication by $\Delta$) while $E$ is in the LSB part. If $|E|<\Delta/2$ (so if every coefficient $e_i$ of $E$ is $|e_i|<\Delta/2$), then the second step of the decryption returns $M$ as expected. If the error does not respect the condition, the decryption is incorrect. In the following image we represent the i-th coefficients of $\Delta M +  E$.

To better understand GLWE ciphertexts, let’s make a toy example where we use parameters that are totally insecure, just to fix ideas.

We sample the secret key with uniform binary distribution as $k$ polynomials of degree smaller than $N$:

In the next blog posts we will sometimes use what we call trivial GLWE ciphertexts. Those ciphertexts are not true encryptions, in the sense that they hide information, but must be seen more as placeholders: they have in fact the shape of a GLWE ciphertext but the message is in clear. A trivial ciphertext of a message $M$ has all the $A_i$ set to $0$ and the $B$ equal to $\Delta M$:

No worries, we never use these ciphertexts to encrypt sensitive information of course! In the next blog posts we will show how to use them to inject publicly known data in homomorphic computations.

In the previous section we showed you how to do secret key encryption. It is also possible to encrypt by using a public key. In practice, a public key would be a list of encryptions of zero (i.e. $M=0$). To encrypt a message, it is sufficient to take a random combination of these encryptions of zero and add the desired message $\Delta M$. Since we will not use public key encryption in this blog post series, we will not go into more details. But if you are curious about the subject, check this paper.

GLev ciphertexts have been used in FHE for a long time: in one of the following blog posts you will see them being largely used in some crucial FHE leveled operations. The name GLev was used for the first time in CLOT21 to be able to identify an intermediate type of ciphertext between GLWE and GGSW ciphertexts and make at the same time GGSW ciphertexts easier to understand. GLev can be seen as a generalization of the well known Powers of 2 encryptions used in BGV.

A GLev ciphertext contains redundancy: it is composed by a list of GLWE ciphertexts encrypting the same message $M$ with different, and very precise, scaling factors $\Delta$. Two parameters are necessary to define these special $\Delta$’s: a base $\beta$, generally a power of 2, and a number of levels $\ell \in \mathbb{Z}$:

If $\beta$ and $q$ are not powers of 2, a rounding should be applied at the moment of encoding. The secret key is the same as for GLWE ciphertexts. To decrypt, it is sufficient to decrypt one of the GLWE ciphertexts with the corresponding scaling factor. The set of GLev encryptions of the same message $M$, under the secret key $\vec{S}$, with Gaussian noise with standard deviation $\sigma$, with base $\beta$ and level $\ell$, will be noted $GLev^{\beta,\ell}_{\vec{S}, \sigma}(M)$.

In the same way we saw that GLWE was a generalization for both LWE and RLWE, we can observe that GLev can be specialized into Lev and RLev, by following the same rules.

Now that we know what GLWE and GLev ciphertext are, GGSW will be very easy to understand. Let’s put it this way.

With GGSW ciphertexts we once again add some redundancy thanks to a 3rd dimension in the structure.
In particular, in a GGSW, each GLev ciphertext encrypts the  product between $M$ and  one of the polynomials of the secret key $-S_i$. The last GLev in the list just encrypts the message $M$:

The secret key is the same as for GLWE and GLev ciphertexts. To decrypt, it is sufficient to decrypt the last GLev ciphertext. The set of GGSW encryptions of the same message $M$, under the secret key $\vec{S}$, with Gaussian noise with standard deviation $\sigma$, with base $\beta$ and level $\ell$, will be noted $GGSW^{\beta,\ell}_{\vec{S}, \sigma}(M)$.

In the same way we already saw for both GLWE and GLev, we can observe that GGSW can be specialized into GSW and RGSW, by following the same rules presented before.

Curious to know how we use these ciphertexts to build FHE operations? Read part II to get one step forward in the comprehension of the TFHE scheme by showing you how to use different encodings and how to use some basic homomorphic operations.
‍

‍
And a special thank you to Damien Ligier for the valuable feedback and editing of this blog post.

At zama, we are building products to make fully homomorphic encryption accessible for all. 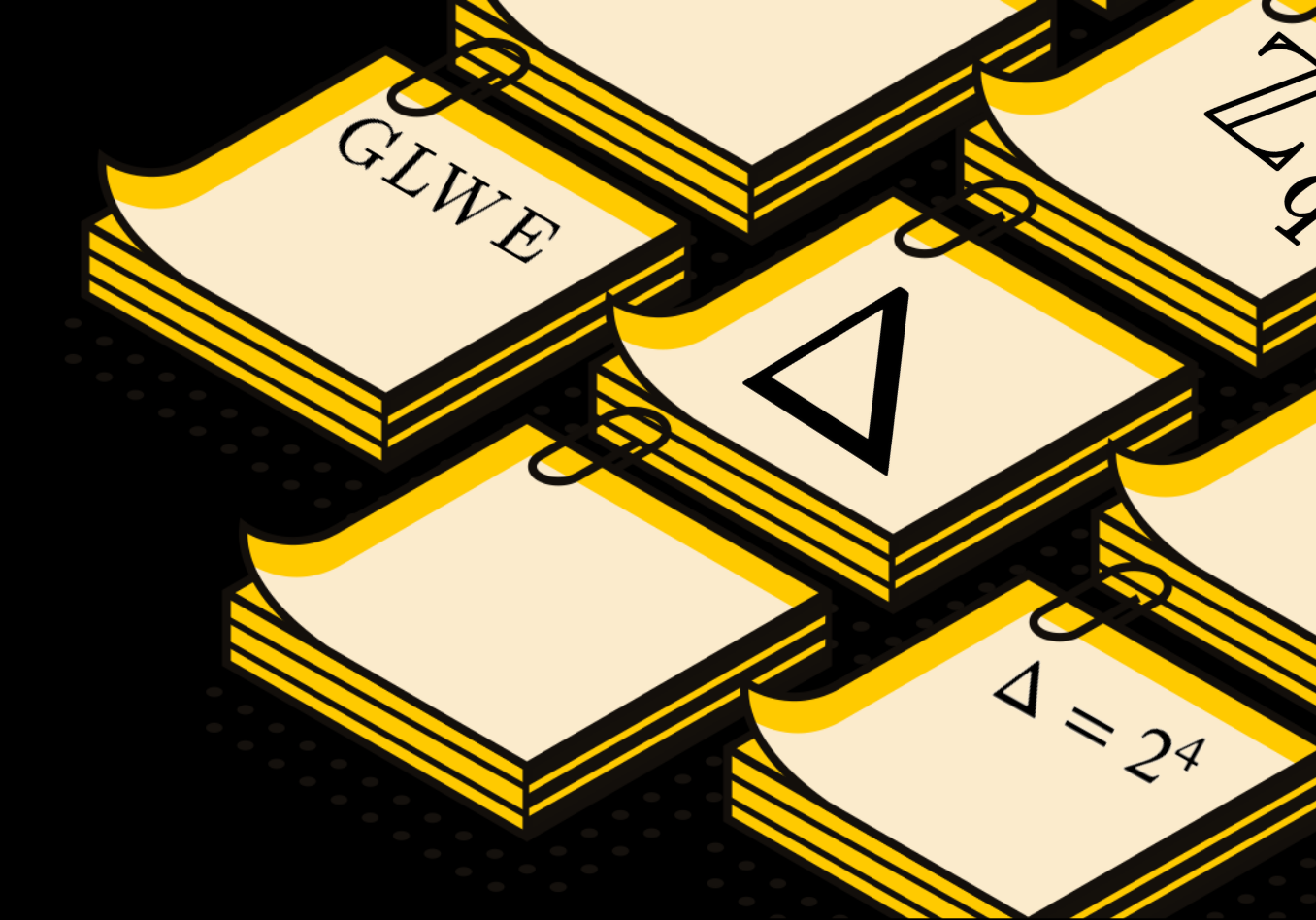 This second blog post of the series shows you how to perform operations on the ciphertexts used in TFHE. 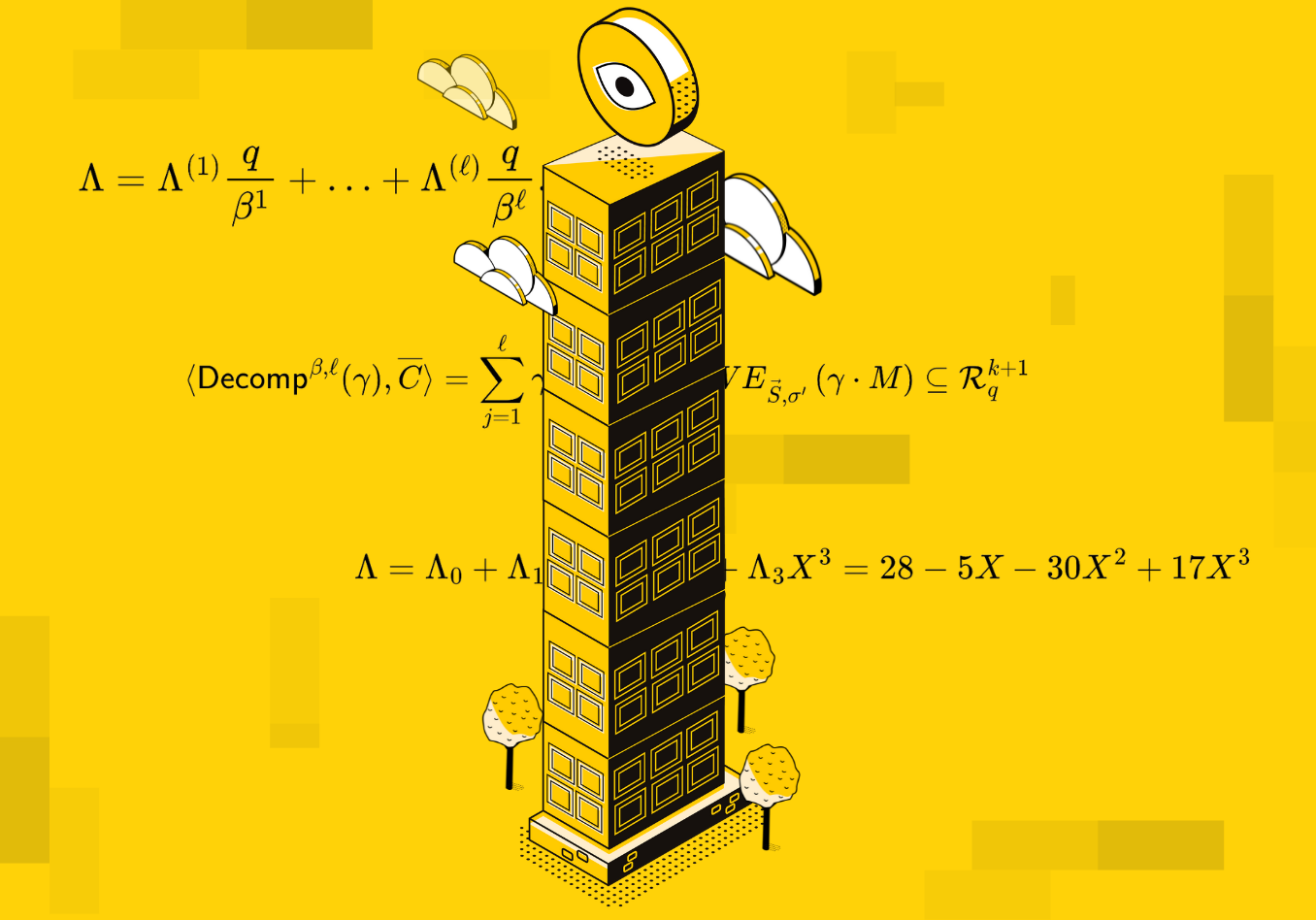 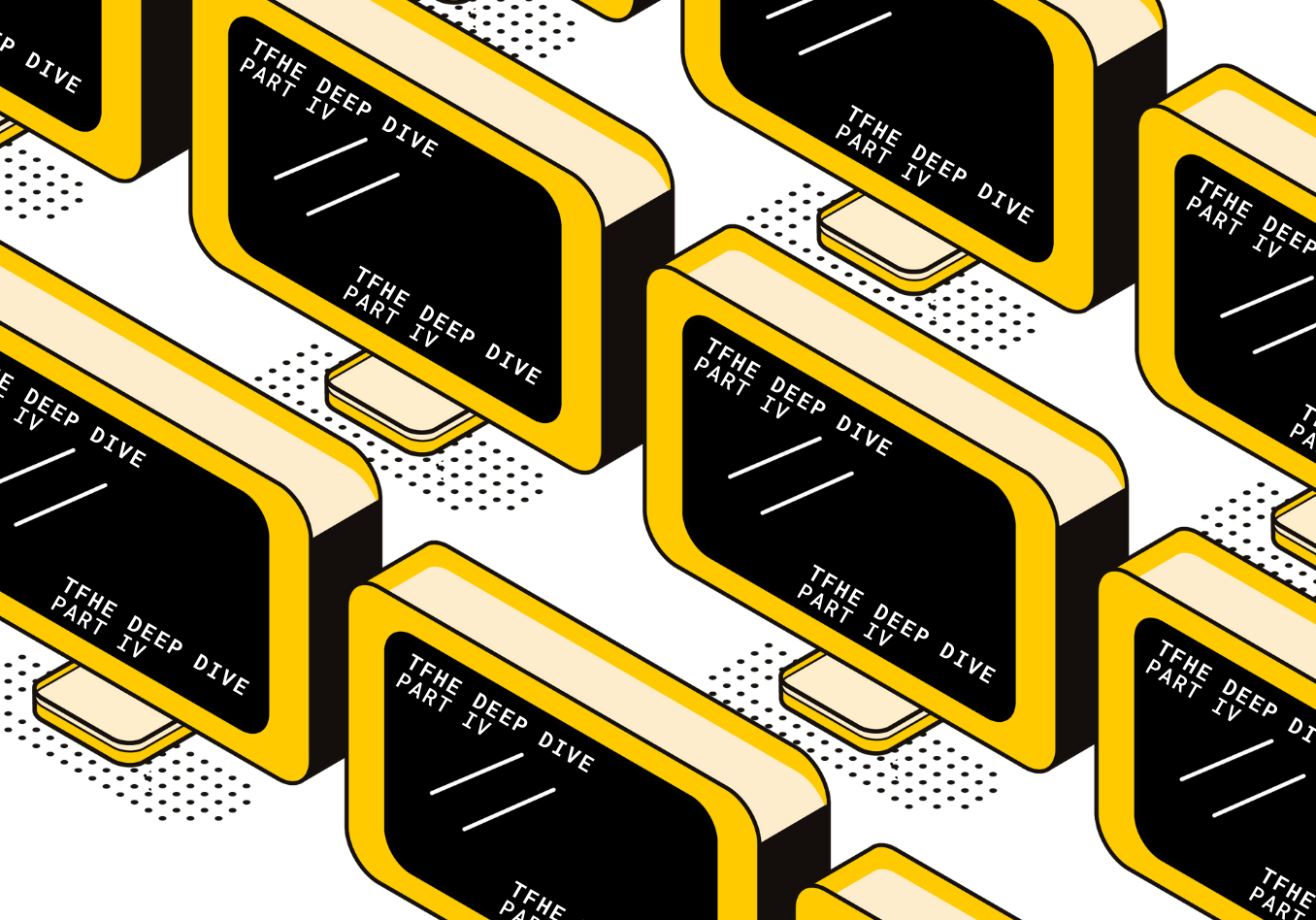 This fourth and last part of the blog post of the TFHE series is dedicated to bootstrapping.